All that has to do with the art and arts.

Who Knew Censorship had a sense of humor?

A sense of humor, a sense of style…a sense of good times?!!

You can’t hate on a block for too long if itplays pong, does meat spins and can kick a person in the bread basket  can you?

Yes censorship apparently has it’s purpose…Were it not for censorship we might all be pinko red commies right now too, check it out:

Hahaha, yeah they got your number too McAllen, Texas!!!

Yeah, you put those two words together on a post and you’re bound to get some hits…yeah.

Anyway, the other word is Radiohead. It’s a great word, and an even BETTER band. You love ’em…YOU MUST.

Apparently the guy that made this video does too, and he does so with a dot matrix printer.

You Ever Have One Of THOSE Days? 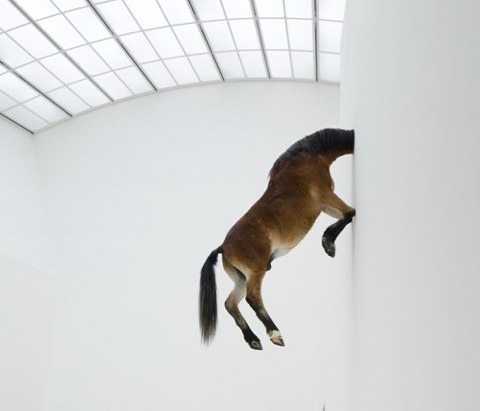 If not, you can get more of the ABSURD, via one of many artist Maurizio Cattelan‘s work. He totally  pays homage to the fantastically (another way of saying F-d up) absurd culture and society that we live in.

Wait a tick, what are the contributers of “The NERD of Her!” doing making a video, uh?

Oh wait, no nevermind, these characters are WAAAAAY cooler. Pfft, just look at those threads!  And that’s gotta be jello cause we rarely bring jam to parties (which would explain our sad parties).

Wow, they make a crackin’ track too!

Yeah, we might very well have our theme song/video in our hands… Hey, at the very least another power nerd in Ms. Ana Elena Pena.

Maybe you want her in your Space. 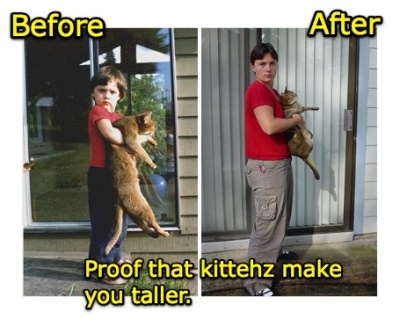 Hey do you like looking at photos of random strangers on the internet?

Do you like to look at photos of random strangers when they were children, or younger and then compare them to the current photos in EXACT poses of the youth photos?

Do you think you’d like to be one of them random people and try the photographic experiment/experience for yourself?

Then look no further and look on to YoungMe-NowMe.

Youngme – Nowme is an interesting project by Zefrank (pictured above) where people can submit two photos (hey that’s what I said earlier, right?). One photo is of when they were little and the other as a “grownup,” recreating the pose of the ‘younger’ picture.

Yeah it’s not “Hot or Not”, and it probably wont make you famous…but the kid you would try it.

But who will sue the Watchmen? 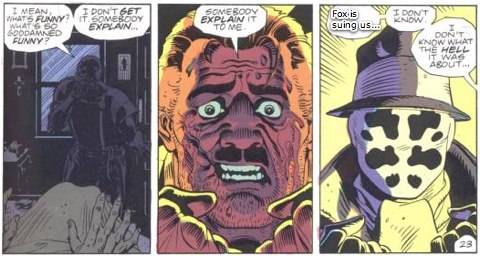 “I hear always the admonishment of my friends:
‘Bolt her in, and constrain her!’
But who will watch the watchmen?
The wife arranges accordingly, and begins with them.”

Okay, so maybe the watching (as in when you’ll see the movie) will take a little longer than expected (cue the cries and whines of comic fanboys/girls),because FOX has its lawyers working double time.

The short of it?

Watchmen movie was scheduled for release March of next year, but with the lawsuit, that date might be later.

Well, from my total and poor understanding of the law, the legal battle between FOX and Warner Bros. kicked off because:

Between 1986-1990, Fox acquired exclusive movie rights to the DC comic series and screenplays. Then in 1991, Fox assigned some rights to Largo Entertainment with the understanding that FOX had exclusive rights to distribute the first motion picture version of Watchmen. Then, when Largo dismantled, and the rights went to a producer named Gordon, that producer was supposed to pay a buy out from FOX if he entered into any agreement with another studio to produce Watchmen (among other things.)

Well, Fox claims that neither Gordon or Warner Bros. paied the buy out price and well here we are…

Does that make sense?

If it doesn’t I’m sure you can find many an other website reporting about it in further detail right now. You can read where I got the scoop by clicking HERE.

Or you can watch a rerun of The Simpsons which featured watchmen author Alan Moore.

How they managed to get him on the show, I’ll never know. I guess he has a good sense of humor, let’s hope the lawyers do too…eh

If for some reason you can’t view the complete episodes on the FOX site (Link on Milhouse photo), someone was nice enough to upload a clip on the YouTube. See it HERE.

Is it only the name of a great grundge band, or is it the feeling I left with after watching last night’s episode of The Simpsons?

I was entertained, but mostly left with an uneasy almost depressed/crushed feeling.

Sure, Homer never looked cooler and hell, his band was pure GEEENUIS, but if this new storyline is really true (to the time it’s being set in), then does that mean “Hullabalooza” never happened?

Please say that isn’t so. 😦

Why didn’t they just make this episode one of those Tree House of Horror kind? I mean, at least that would’ve helped…hell they could’ve even said it had something to do with Bart going back in time in a DeLorean, anything…I dunno.

And those are just some of the memories this latest episode is ruining for me. 😦

No, you’re not seeing stuff, it really is what you think it is.

Yep, Someone really created a tattoo that allied the forces of kitty and evil (which in some galaxies might be the same thing)onto flesh.

This image (like a good deal of Hello Kitty and Darth iconography) has been scorched onto your eyes for what may seem like a long time, but it’s also on someone’s skin FOREVER.

Inked by a tattoo artist from Youngstown, Ohio and inspired by some kind of Jedi mind trick of artist Nick Jones the tattoo is causing all kinds of commentary.

“It was bound to happen because, as regular readers well know, this is Hello Kitty Hell and that means there is no limit when it comes to Hello Kittification. It also means that common decency is suspended and the sacrilege event of mixing Hello Kitty with other pop culture icons –which should not happen in the worst of nightmares — is common place. ” —Hello Kitty Hell

We here at the nerd headquarters are almost at a lost for words. What can we say, really?

They say a  picture is worth a thousand words,  a tattoo will probably cost a few job interviews.

Course it probably saves you from any possibility of being mind choked by Darth, but who knows.

A Hello Kitty that also wields the dark force and power of a Galactic Empire…scary that paw is.

Stan “The Man” Lee is a hero in his own right. His latest power?

Inspiring some really awesome artwork. Just look at this: 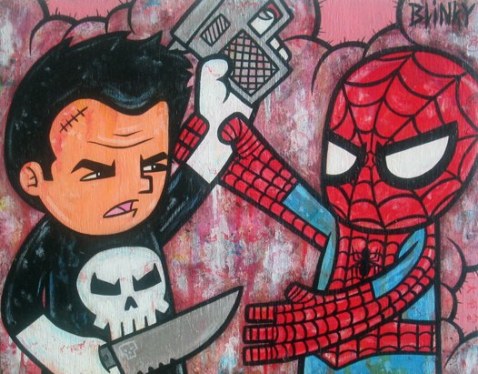 Sure the page has quite a bit of characters that Stan didn’t really create, but so what? A lot of looks really cool!

Do yourself a favor and visit Gallery 1988 LA, for some “really fun interpretations of characters Mr. Lee helped create.”

Or at the very least check out their website:

(This guy had a lot of fun there too.)